Venus DeMars Interview on The Local

Venus DeMars joined us on The Local to chat about the new Venus de Mars & All The Pretty Horses album, I Think The Darkness. It was released on June 11, 2022 and has four original songs and two covers. In the interview you'll find out what inspired the new music, including the covers of The Velvet Underground and David Bowie. Plus you'll learn about the memoirs that Venus and her spouse are writing at the same time. Venus de Mars & All The Pretty Horse are playing a show in Superior, WI on August 27th with Stardust Collective and Babie Eyes. 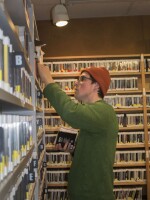