Day 6 of the Homegrown Music Festival is when things start to really get serious. The number of venues almost doubled from Thursday, and they stretched from the Owl's Club in the hillside all the way to Wussow's in West Duluth. The trolley or one of the Leaf scooters that have popped up everywhere this year offered quicker ways to get between venues, but it still required careful planning to not miss out on that act across town.

In the evening, what better way for new Homegrown venue The Owls Club to kick things off than with a performance from the Owls Club Big Band? The 16-piece group, made up of a who's-who of local musicians, swung hard for Homegrown fans upstairs while the downstairs remained members-only. Unsurprisingly, the venue was at capacity by the end of the show, an auspicious start to Friday night's festivities.

At Wussow's in West Duluth, the Ripley-Jaakola family band #theindianheadband was having tons of fun, backed by local rapper JayGee on drums. They mixed Ojibwe singing and drumming with rock and pop music, putting their own socially conscious twist on songs like the Village People's "YMCA" that became "BWCA" to pay tribute to the Boundary Waters. They also covered Indigenous singer/songwriter/guitarist Cary Morin's "Idle No More."

At Zeitgeist's Teatro Zuccone, Judas, a singer songwriter with heartfelt lyrics and catchy melodies, opened the evening. Meanwhile, back at the packed Owl's Club, Danny Frank & the Smoky Gold performed songs from his debut album.

Timbre Ghost, a Duluth native who now lives in Montana, expressed appreciation for having the opportunity to perform in the beautiful Sacred Heart space with amazing acoustics. In addition to originals, his set included a cover of Dolly Parton's
“Sometimes an Old Memory Gets in My Eye”. Out at Wussow's, Kaylee Matuszak took the stage.

Next at Teatro Zuccone, Onto Maple played spacey post punk on synthesizers with gentle, percussive bass accompaniment and heavy reverb on the vocals. The catchy, fun songs were lo-fi but interesting, and flowed together without many pauses in between.

At Legacy Glassworks, heavy/loud music kicked off at Legacy with Southpaw and their progressive metal/punk sound. Outside an artist was blowing glass on the street and a large crowd was taking in the jams inside.

At another new Homegrown venue, Annex du Nord, experimental duo ARP Diocese leaned over their banks of synthesizers building instrumental textures by layering synth lines and other sounds over a steady, driving beat.

Tarli started off the night's entertainment at Blush with some R&B and hip hop. Before he took the stage, his backup singers warmed up the crowd with solo spots. Tarli started his set with his new single “Heaven Sent," asking the crowd to help with the chorus.

Jaw Knee Vee was likely one of the more raucous acts to ever play at Sacred Heart. The one-man punk-surf band tore up the church, boosted by the venue's natural reverb. The puppet on his drumset was bouncing along with heads in the crowd during his performance.

Dance Attic took to the trolley for a set of their quirky accordian and guitar tunes. Suzi Ludwig of the band's daughter and her husband, Andrew Stern of Fearless Moral Inventory were riding along; "You can do 'Give it Up,' said Stern, referencing a Fearless song Dance Attic have been known to cover. "We're not going to do it tonight." "What?" said his wife, disapprovingly. "Then you need to rewrite your setlist!" Word has it that, since the next trolley act had to cancel, the duo played an extra-long set.

At Sacred Heart, Superior Siren Laura Sellner walked onto the stage solo, her voice and guitar reverberating in the hushed former church. She went to the piano to play a Joy Crookes song before inviting her band on stage, quipping, "I guess they're busy" when it took them a moment to come out. Laura dedicated “For Mother” to her mother, whom she lost to brain cancer, and to celebrate all mothers this Mother's Day weekend. The set included some new songs, including “Damaged Goods,” and a Shania Twain cover they learned just for the occasion, “You’re Still the One."

The Supertacks was the first act at RT's; the alt-rock punk group reunited to pay tribute to their late drummer, Benjamin Craig. Guitarist Aaron Ashley switched from a Dames shirt early on to a Wolf Blood one later, paying homage to two of Duluth's classic heavy bands.

Old timey trio Sugar on the Roof fully embraced the "Formal Friday" theme for the night for their set at Carmody; fiddler Clancy Ward went so far as to wear a top hat.

On the opposite side of the fashion spectrum, Superior band P.B&J took the stage at The Flame wearing the peanut butter and jelly costumes featured on the cover of their latest album Hamboneing. Singer Peter Anderson introduced their song "Young Jake," saying "it's about our bassist over here, Jake," before launching into the tender ode to his bandmate (who, of course, played along on bass). Next was a bluesy rocker, then a harder rock tune, showing that the band is nothing if not versatile.

Meanwhile just downstairs and next door at Blush, the Trash Cats, who've been doing regular livestreams for the past two years, took advantage of their live, in-person set by dressing up in suspenders and ties. They played a set of their offbeat, '90s-inspired acoustic rock on keyboard and guitar.

When Lyla Abukhodair took the stage at Pizza Luce, the venue was at one in, one out status. A long line of people waited for their turn to get in to see the frontwoman and her band that included a horn section.

Meanwhile, down the street at R.T. Quinlan's, improvisational bass-and-drums duo Purple Hearse was blasting their loud creations to an appreciative crowd.

At the Rex Bar, Fearless Moral Inventory frontman Andrew Stern was working the crowd. "I want you to come closer to me.," he said, emphasizing each word. "I want you to have a good time. I want you to dance your ass off." He rewarded those who did dance by tossing out tie-died bandanas, and started a chant, "We are Fearless and we love you!"

Back at R.T.'s, punk rockers Manheat took the stage, playing a raucous and rowdy set that inspired heavy moshing. At one point the lead singer handed the mic to someone in the front row who advised him to “shut your piehole and play some more punk rock!"

Ann Kathryn, backed by George Ellsworth on bass and organ and Dominic McFadden on guitar, ran through a set at the Rex Bar that showcased her powerful vocals and also gave her backing players a chance to shine.

Dave Mehling's band the Fontanelles capped off the night. The band was missing a regular member, but added Jason Wussow and Owen Mahon on percussion and Jacob Mahon on guitar and brought Emily Haavik up to add vocals as well for a fun, jamming set to end the evening.

Honey Dick, who were scheduled for the Owl's Club at 6:45, have bowed out due to illness.

A reminder to check the online schedule at duluthhomegrown.org, which has the most up-to-date information.

The trolley will be running again tonight from 7pm-1am. 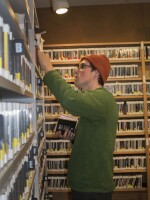 Malachy Koons
Malachy began his radio career as a student DJ with The Basement at KUMD. He fell in love with radio and decided to make a career in it. He is now the host of Music Through The Day and The Local on The North 1033, as well as their Traffic Coordinator and Assistant Music Director. In his spare time, he enjoys seeing live music and hunting for records.
See stories by Malachy Koons
Colleen Ferrian
See stories by Colleen Ferrian
Related Content